We've gotten a lot of requests for a follow up on our first report about Kettner Exchange and we're happy to oblige.

The 10,000-square-foot site will house a double-decker restaurant and lounge and a bi-level donut and coffee shop (more on that later). Originally due in spring, city zoning and permitting delays have pushed the ground-up project's opening until Fall 2014, likely early September.

Native San Diegan Matt Spencer (Vin De Syrah, FIREHOUSE) started his career as an event promoter and club owner, and tells Eater that Kettner Exchange is a reflection of his maturity as a business operator, saying that he intends for the restaurant, his most food-focused yet, to have a high level of service and be "upscale but fun".

The fun start daily at 4 p.m., with brunch on weekends, in a 7,500-square-foot space designed by [oo-d-a] and Tecture (The Patios on Lamont and Goldfinch) in collaboration with Bluemotif Architecture. On the street level, described by Spencer as "your dad's library" is a bar and a dining area with a mix of standard tables, lounge seating and communal tables behind a glass roll-up door that opens onto Kettner; glass panels set along Grape Street will allow views into the kitchen, where an alcove with a chef's table that will host custom dinners and wine and beer events. 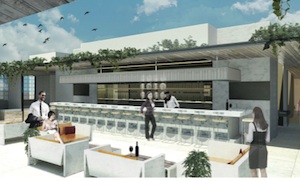 Upstairs, the indoor/outdoor layout includes another dining room with attached patio and an open-air space that'll hold a bar, a fire pit, a hanging bed for lounging and five cabanas, each with their own beer tap and wet bar. As a bonus, there's a nearly unobstructed view of San Diego Bay.

Donut Joint, their adjacent donut and coffee shop, will come online a few months after the restaurant opens. It'll also have a rooftop patio, and serve a selection of baked, fried and gluten-free donuts, plus organic drip coffee from Cafe Virtuoso, starting at 7 a.m. daily.