Whisknladle Hospitality, which runs La Jolla's Whisknladle and Prepkitchen in Del Mar, La Jolla and Little Italy, is adding another restaurant to its roster that will be an entirely new concept for the group.

Catania will be owner Arturo Kassel's fifth restaurant; it's headed to the La Plaza building, currently under redevelopment at the corner of Wall Street and Girard in La Jolla (some readers will remember that it used to house Jack's La Jolla). The complex's renovation should be complete by the end of the year, and Catania is aiming to open in early 2015.

The restaurant will occupy 3,750-square-feet on the top floor of the building, which will allow for ocean and village views; though La Plaza will have other food tenants, Catania will be its only full-service, sit-down restaurant.

Kassel, who opened Whisknladle just down the street in 2008, says the new restaurant is an opportunity to provide his loyal and regular customers with a different dining experience. He shared, "We're thrilled to be taking on this new challenge and for the opportunity to exercise a different side of our brain. Catania has been six years in the making dating back to a two week road trip that Chef Ryan and I went on throughout Italy. 1,400 miles driven, 72 double espresso's consumed and 8 lbs of weight gain later, the basis for what will now be Catania was formed. We've been eagerly waiting for the right time and opportunity and strongly feel that La Plaza in La Jolla will allow us to open a restaurant built to last." 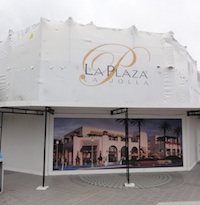 Although Catania shares its name with a town in Sicily, Kassel says the restaurant won't focus on the food of any specific region. Everywhere from the Amalfi Coast to Portofino will be inspiration for their "Coastal Italian" menu; there will be seafood, and an emphasis on lighter dishes.

Whisknladle's creative director, chef Ryan Johnston will contribute to the concept, though Kassel told Eater that they'll be promoting a chef from the group's current ranks to lead Catania's kitchen.

Longtime collaborator Bluemotif Architecture will putting together a modern space for Catania; Kassel promises that it will not include reclaimed wood or Edison bulbs.
· Whisknladle Hospitality [Official Site]
· All Expansionwire Coverage [~ESD~]