Share All sharing options for: Catching Up With Juniper & Ivy Chef Richard Blais

Welcome to One Month In, a feature in which Eater sits down for a chat with the chefs and owners of restaurants that have just completed their first month in business. 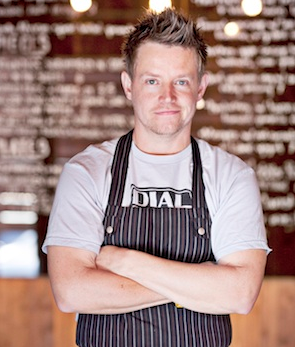 On a recent afternoon, just before another busy service, Eater sat down with Richard Blais to look back at Juniper & Ivy's first full month of operation in San Diego. Blais spoke about the restaurant's early success, talked about when he'll finally launch his tasting menu and shared that San Diegans have a surprising fondness for beef hearts.

We're probably twice as busy as I thought we'd be, based on the amount of people that are coming in. And the reception, generally-speaking, has been at least twice as more warm as I thought it would be. So many restaurateurs, chefs, servers and bartenders have come in and been happy with their experience, and I was not expecting such a warm response. I guess that's just the way San Diego is and I love that; I love the fraternity of this city. It means a lot.

Have you noticed any particularities about San Diego diners?
They like to come out to eat! We're cooking for 300 people on Monday, Tuesday and Sunday nights. And I think people generally like to eat early here.

Are there dishes you thought wouldn't go over well that have been really successful?
We've had no problem moving the "riskier" things, whether it's sardines or chocolate clams, or beef heart or bone marrow.

Beef heart was surprising. We put it on and in two nights sold something like 42 orders of it, so that's good to see.

What's next for the restaurant?
We're still trying to extend our honeymoon here. I just spoke to our staff to remind them that we're a brand new restaurant and we need to think about every day like it's our first week and not rest on any early laurels. I don't want to become complacent.

What are some factors that have contributed to a successful first month?
We are blessed to have an owner who put a lot of money into this and isn't necessarily looking to make a ton of money. We have the right amount of staff; there's not a constant pressure to drive things like labor or food costs. We had 800 applicants in the beginning that we whittled down to 75. We have really good people; I get the credit or blame for everything but there are 75 other people that should get all the credit, or blame, too.

Looking back on the last month, is there anything you would have done differently? Any advice you'd give yourself in retrospect?
The only advice that I need to keep reminding myself of is not to get tied up in what people are writing on web, whether they're good or bad, and not to make knee-jerk reactions based on one review. I need to stay with my hands in the kitchen and keep my head focused and not get too concerned about what Yelper said this or that.

Do you feel like you're readying to launch the tasting menu?
We're going to do a tasting menu and we know that we have to pull the trigger on something like that very soon. I don't know how many we'll do a night and we still have to figure out of it's only for the chef's counter or certain days of the week.

Have you been able to get out of the kitchen and try or see anything new?
Not really, I do want to get over to Ironside. I've seen some pictures of the dining room and I love the design of it. And I still have yet to cross the border. I'm working and traveling and with the little time I have left, I'm spending it with my family and cooking at home.
· Juniper & Ivy [Official Site]