When A Fine Dining Chef Decides To Take On Pizza

Share All sharing options for: When A Fine Dining Chef Decides To Take On Pizza 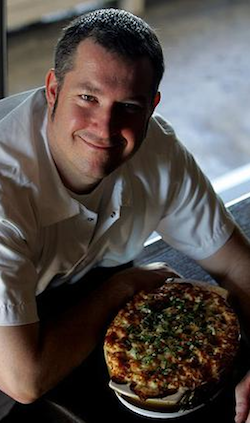 When Wade Hageman left Solana Beach's now-shuttered Blanca to open Blue Ribbon Artisan Pizzeria in 2010, the fine dining-trained chef, who also owns The Craftsman and Hillcrest's Blue Ribbon Rustic Kitchen, applied his culinary sensibilities to a new medium, carrying over his passion for local ingredients and dedication to hand made food to work with a wood-fired oven instead of a gas-powered range.

Now, more local chefs are diversifying into pizza. When MARKET Del Mar gave itself a quick refresh last November, a main addition was a new Woodstone pizza oven, which bakes up pies topped with house made fennel sausage. Chef de cuisine John Thompson shared that though there was a six month learning curve as they honed their techniques, the pizza-making is a "new approach to presenting interesting flavor combinations in a more casual way".

In this Pizza Week interview, Blue Ribbon's Hageman talks about what inspired him to launch his pizzeria, how he sets his pizza apart and the state of San Diego pizza.

What was the reason behind starting Blue Ribbon Artisan Pizzeria?
It's something I'd always wanted to do. I'd purchased the oven years ago and had it in my garage because I knew it would force me one day to go ahead and go ahead and open to go ahead and open my own restaurant. The biggest reason was that my friends and family could not afford to eat in the restaurants that I worked at. I was looking for a medium where I could feed everybody but still use the best ingredients, and I found that through pizza. It's appealing to everybody and it's an awesome way to get what I want to do as a chef across to a majority of people.

Were you inspired by any place in particular?
When I was in culinary school in Phoenix, it was before Pizzeria Bianco blew up so big. We used to go there to have their pizza because it was so different from what everybody else was doing. If anything, that's what inspired me.

How did you learn to make pizza?
My first job was in a mom and pop Italian place in high school, I was washing dishes and one day the pizza chef didn't show up so I had to get on it, and I just had a knack for it. Other than that, I worked at Spago and worked the wood oven there.

How did you apply you fine dining training to pizza?
We've always tried to use local farms as much as we can, even before farm-to-table became the catch phrase that everyone uses whether it's true or not. I do a three-day fermentation process on the dough like you would treat any kind of artisan bread, we make our own mozzarella, three different types of sausage, canadian bacon, cappicola, and pepperoni. We do everything the old way, and using the best ingredients we can find has always been my philosophy. It should be the way that everyone cooks.

Was there a learning curve when you started?
It was a learning curve for me, being so close to the water with the humidity, it took me three months before I was happy with my dough. And at first, people didn't understand why the pizza wasn't round, and I had to explain that it was an artisan product and that I wasn't trying to make cookie-cutter pizza. People didn't understand that when you're cooking in 800 degrees and an actual fire, there's charring that takes place. There's so many places now that are using gas ovens, throwing a couple logs in and calling it wood-fired pizza, and in my opinion that's not the real deal. But overwhelmingly the response has been great.

What do you think about the fast-casual pizza boom?
I think it's terrible that places are trying to claim they're something that they're not and jumping on the bandwagon. But there are some really great places in town that are really hand-making their products. It's like the burger trend, people think they're doing something special but they're really just diluting the market. It's disappointing but it's the way of life.

Who else do you think it doing it right?
Blind Lady Ale House does a great job. And I had pizza at Caffe Calabria that was good.

Do you have any plans to open more pizzerias?
Not at the moment. I'm really trying to focus on the three restaurants that I have. I wouldn't rule it out but to really do the true wood-fired pizza and everyting that goes into it, it takes a ton of work; it's not an easy job, my arm is sore every night. It takes three months to train someone to handle the oven by themselves. It's a trade, and a craft, that you have to learn.
· Blue Ribbon Artisan Pizzeria [Official Site]