The fast-casual pizza boom in San Diego, featuring build-your-own pies that are cooked in less than 5 minutes, continues to gain momentum in 2014, with many more players joining the field.

The concept is simple: pick from pre-designed pies or create your own pizza, choosing from an array of unlimited fresh toppings. Pizzas are baked at high temperatures, lightning fast; prices vary, but most companies are pricing their pies under $8.

San Diego already has more than a half-dozen of these restaurants to choose from (a mix of standalones and chains), with several more set to open later this year. In this round-up, we dissect the customizable pizza players in San Diego, so you'll know what to expect and which are worth eating. 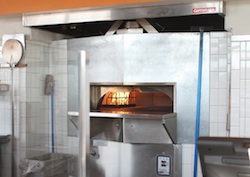 Social Life Pizza
Social Life Pizza opened its first location in the College Area of San Diego in late 2013. A second location opened inside the Grand Canal Shoppes at the Venetian in Las Vegas earlier this year.
Crust: Social Life Pizza features a crust that has been fermented for two days and is cooked in a domed Forno oven with temperatures that reach as high as 900°F, producing a thicker crust than most of its competitors and one of the chewiest. A little too chewy for some (your jaw might be a little sore afterwards). The crusts are also sprinkled with dried oregano, garlic and olive oil for a little more flavor and Italian flair.
Sauce: Four fairly standard options are offered-- San Marzano Crushed Tomatoes, BBQ, Pesto and Olive Oil & Garlic.
Toppings: There are 24 popular pizza toppings to choose from. The cheese selection is one of the largest, with seven choices. They also offer some premium toppings, but for an additional charge ranging between $1-3 extra. Most other brands are not charging extra for premium toppings.
Speed: While the pizzas are cooked in under 5 minutes, there is a noticeable lull between ordering and receiving the freshly baked pies.
Price: Custom 12-inch pies are priced at $7.50 (excluding any premium add-ons). They also offer a few simpler pies with a starting price of $5.25.
Extras: Some of the aspects that set Social Life Pizza apart are the offering of craft beers and wines by the glass, and two dessert pizzas. 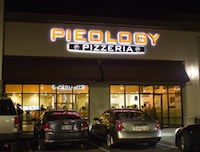 Pieology Pizzeria
Pieology has two locations in San Diego and more than a dozen scattered throughout California, with many more stores set to open on the West Coast this year. One of the main founders is Carl Chang, older brother and former coach of tennis player Michael Chang.
Crust: The crust is thin, crispy, cracker-like, with virtually little to no chew. The pie crust is baked at 500°F for 3-5 minutes.
Sauce: There are three sauces to choose from: red, herb butter, or olive oil. Some of the other commonly found sauces like pesto and BBQ are offered as "after bakes" which are drizzled on after the pizza is finished.
Toppings: There are 17 toppings, 4 cheeses, and 7 "after bakes" to choose from. The after bakes are an additional set of sauces/toppings which are added on after the pies are finished baking. The after bakes add a little more zest and flavor to the pizzas but they often end up making the finished pies look less appealing (think big red splotches on your beautifully crafted pie). Another downside is that the after bakes are applied cold.
Speed: It might have something to do with its popularity or the relative newness of the San Diego branches, but the San Diego locations have been struggling with the "fast" aspect. During peak hours, expect a bottleneck at the assembly line, with wait times close to an hour. Pizzas come out slower as well because of the long queue.
Price: Custom 12- inch pies cost $7.50, with the exception of a classic cheese pie offered for a lower price of $6.
Extras: Pieology sticks pretty close to the basic formula with very little else setting it apart. They do offer pizza dough strips coated in either herb butter or cinnamon sugar.

Project Pie
If you've stepped foot inside both Pieology and Project Pie, you'll immediately notice the nearly identical décor (especially the wall of inspirational quotes). This is because founder, James Markham, also helped launched Pieology and MOD Pizza. His current brainchild, Project Pie, has locations in San Diego, Las Vegas, and the Philippines, with several more locations slated to open this year.
Crust: The pie crust is baked at 800°F. It's thin, but manages to be both crispy and a little chewy.
Sauce: The only choices are red or no sauce. Pesto and BBQ can be a drizzled on as toppings.
Toppings: There are 22 toppings to choose from along with 5 cheese variations. Some of the more exceptional ingredients offered include caramelized onions and prosciutto.
Speed: When it first opened, lines moved lightning fast. As it's grown in popularity, wait times have gotten longer, especially during peak hours.
Price: Custom 12-inch pies are $7.85 (an increase from its original starting point of $7.50 when it debuted). A cheaper classic cheese pie is offered for $6.
Extras: Some of the unique offerings at Project Pie include their Boylan's soda fountain featuring drinks made with pure cane sugar and dessert pies, including a Nutella and banana pie.

The Pizza Studio
This Los Angeles-based chain is on the rapid expansion track. The first local Pizza Studio branch opened in the Gaslamp in January of this year, with plans to open 20 San Diego locations in the next five years. There are other outposts across California and Arizona.
Crust: The only one of the contenders to offer five distinct crusts: traditional, firecracker, rosemary herb, whole grain & flax seed, and gluten-free. The crust is rolled out paper-thin, but manages to maintain quite a chew. The added flavor to some of the crusts is a welcome addition. Unlike most of the competitors which use a gas-fired oven, the pies are baked on a conveyer belt convection oven to produce consistent results.
Sauce: There are four standard sauces to choose from: tomato blend, basil pesto, BBQ, and extra virgin olive oil.
Toppings: 22 toppings are offered, including several uncommon ones like roasted broccolini, zucchini, Genoa Salami, and nitrate-free pepperoni. In addition, there are four "finishing touches" options, and five "spice it up" seasonings (such as truffle salt) you can choose from to be added on before the pizza goes into the oven.
Speed: So far, wait times haven't been a big issue. However, the restaurant is pretty new, so lines have been relatively short.
Price: Custom 11-inch pies are $7.99, which is on the higher end, especially since the pies are also an inch smaller than most of its competitors. They do offer five pre-designed "Starving Artists" pies with a limited amount of toppings, priced at $5.99-- one of the few brands to offer a reduced price for multi-topping pies.
Extras: The larger selection of toppings and crust flavors are some noteworthy characteristics that sets this chain apart. They also offer fresh baked cookies for dessert. 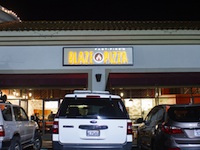 Blaze Fast-Fire'd Pizza
Blaze Fast-Fire'd Pizza was launched by the founders of Wetzel's Pretzels. It's one of the fastest growing chains, with plans to span across 14 states soon. The first San Diego branch opened in the Carlsbad Premium Outlets earlier this year.
Crust: The thin crust recipe developed by Chef Bradford Kent (executive chef of the very popular Olio Pizzeria & Café in Los Angeles), is both crispy and chewy. Pizzas are cooked at around 800°F and finished in about two minutes.
Sauce: The only one of the bunch to offer two tomato-based sauces: a regular and a spicy red, and a white cream sauce. They also offer pesto, BBQ, and olive oil.
Toppings: 22 standard toppings are offered. The cheese selection count, at 6, is the most noticeable standout. One negative note is that the employees are a little conservative on applying toppings. Of course this can be easily rectified by asking for more, but it'd be nice if they started with more generous portions.
Speed: Despite visiting on a relatively busy night, the process still went efficiently and quickly. And if you really want to reduce wait-time, you can also order online.
Price: At $7.45 for an 11-inch custom pie (a little smaller than some of its competitors), it's a nickel less than the next lowest-priced choice of the group. They also offer cheaper solutions for a cheese pizza (only $5!) or a one-topping pie ($5.85).
Extras: Blaze doesn't stray too far from the basic formula, but the seamless operation and online ordering option are definite benefits. They also offer a s'more pie for dessert.

The Overall Winner: We've been pretty pleased with the current fast-casual pizza options in San Diego; each place has its highs and lows, but nothing's been a total dud. That said, Blaze Fast-Fire'd Pizza gets the edge for its tasty pies, low price point, and smooth efficiency.

All-Day Italian Restaurant and Market Landing in the UTC Area