A Lifetime in Little Italy; Behind the Line at Filippi's Pizza

Share All sharing options for: A Lifetime in Little Italy; Behind the Line at Filippi's Pizza

Welcome to a Pizza Week 2014 edition of Lifers, a feature in which Eater interviews the men and women who have worked in the restaurant and bar industry for the better part of their lives, sharing their stories and more. 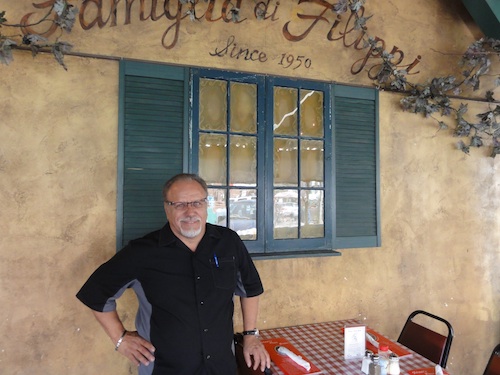 A fixture on India Street since 1950, when Vincent DePhilippis and Madeleine Stefani first founded a deli and grocery called Filippi's Cash and Carry, Filippi's Pizza Grotto in Little Italy was the first in a chain that now includes 14 locations in San Diego and California. The restaurant, with its red and white checkered tablecloths and chianti bottles hanging from the ceiling, specializes in hearty Italian-American food; more often that not, there's a line of waiting patrons stretching the block. Eater sat down with Daniel Moceri, grandson of the original founders and general manager in Little Italy, to talk about the eatery's history and that darn line.

Can you give us more background on this spot?
We've been here in Little Italy almost 65 years. We started with just the market up front, selling to the local tuna fleet; my grandmother would make sandwiches for the fisherman while they were waiting for their orders, and that's how the restaurant came about. We started with a little section of eight tables and as time passed we grew; we took over the pub next door in the 1960's. Now we can seat around 300.

And all your other locations are still owned by family?
Yes, every Filippi's has to be owned by a family member; my grandparents had seven children, five boys and two girls. As each son grew up and got married, they branched out and started their own Filippi's.

When did you start working here?
I was practically born in the building; I grew up sitting at the counter with my grandmother.

Are the lines here more locals or tourists?
A mix of both. We're pretty well known world-wide for old-fashioned, traditional Northern Italian food in big abundance. My grandparents believed in feeding all families, rich or poor, and that's what we base things on.

On a busy night, how long is the wait?
We move pretty quick. If the line goes down the sidewalk, it shouldn't be more that an hour or 45 minutes.

When did pizza get introduced to the menu?
It was probably there from day one. Pizza was an easy tradition, peasant food; whatever you had for dinner the night before was chopped up, put on bread with some cheese and baked. That's really how American pizza started.

What's the most popular pizza here? Has the recipe changed through the years?
Everyone likes pepperoni but we sell an awful lot of vegetarian pizzas. Our pizza has always been the same. We use the old-fashioned bread-style dough; you can get it any thickness you want now but it's my grandparents' original recipe that we haven't changed in 65 years.

How has this neighborhood changed?
I'm vice-president of the Little Italy Association and as you can see, we've fixed streets, put in new sidewalks and trees, new piazzas. We're always improving things and now more people want to come in. Now you're seeing young kids from Italy coming here to open businesses. There's a mix of food here now and we welcome that. It's a good, safe community and we want to keep it that way. Nothing against the Gaslamp, but we don't want it to get too crazy here.

What will Little Italy's identity be in ten years?
The plans we have for the future are to bring in a new giant piazza on Date Street; it'll be like St. Mark's Square in Venice, where everyone can gather with a massive fountain, trees and places to sit.

Will there be more opportunities for restaurants?
People are clamoring to come in now; all the big builders are telling us that everyone in the United States wants to start something here. We've had record sales on property in the last two months.

What will Filippi's be like in ten years?
Hopefully we'll be the same old Filippi's that generations have gotten accustomed to.
· Filippi's Pizza Grotto [Official Site]
· All Eater Interviews [~ESD~]

All-Day Italian Restaurant and Market Landing in the UTC Area