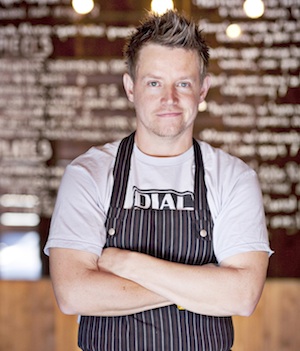 Last year, notable cheftestapant and Top Chef All-Stars winner Richard Blais relocated from Atlanta, home to his Flip burger boutiques and The Spence, and headed west to San Diego, where he announced his plans to open a restaurant in the city's Little Italy neighborhood, telling Eater San Diego that he wanted to "earn a place at the local table".

Since then, in between criss-crossing the country for media appearances, including a hosting gig on HLN's Cook Your Ass Off, Blais has been building out his Juniper & Ivy with partner Mike Rosen, turning a 90-year-old warehouse into a modern showcase for the restaurant's brand of "left coast cookery".

The restaurant is scheduled to debut on Monday, March 3; Eater caught up with the chef as he was still sketching out final plate designs and buttoning up the opening menu, to talk about his expectations for Juniper & Ivy and if his food there will help him be known as more that just "the weird nitrogen guy".

What will you try to accomplish in San Diego?
The Spence was always meant to be a neighborhood restaurant and people would come in and want a tasting menu and we didn't offer it.

Hospitality-wise, I feel like I disappointed a lot of people by not offering that style of food. So here, we are and we're hoping that San Diego is game for it.

A lot of people think my food is all about "weird science", but all of our ingredients will be coming from the West Coast. We're calling it "left coast cookery", everything from Baja to Vancouver. We're also using the term "left" in the political sense, being a little bit more liberal with our ideas, and for me that's the most exciting part.

How does this opening feel different?
Every next project feels like the most important one, I think that's natural. There's so much pressure behind this, it's a five to nine million dollar project, and the ownership wants to do something unique that will hopefully better the dining community here. And I've been trying to get back to California for so long. But you never know, it's like when you're throwing a party and you don't know if anyone's going to show up.

Is Juniper & Ivy the strongest reflection of you, more than any of your other concepts?
This is probably as close to a restaurant of self-authorship that I've ever had. We're going to be pushing and doing things that are a little different, so hopefully people will want that.

What's your impression so far of San Diego, food-wise, and why do you think it rarely attracts national attention?
There's no reason why it can't get national attention, there's tons of talent here. To be honest, I think there's a gap in the market; there are some really amazing white tablecloth fine dining spots and then there's another level of restaurant that's really fun and high-design, where the cocktails are great and the food's just good enough. There's a gap between those two and hopefully Juniper & Ivy can fit in there.

How's the menu coming along?
Further than it's ever been at this time before opening. I think we're 90% there. The ingredients are so amazing here and the seasons change so fluidly, it's great but challenging for an opening. We're going to have a snack category on the menu and feature a stuffed abalone. I'm a native New Yorker so it'll be a West Coast version of a stuffed clam - an abalone stuffed with bone marrow and artichoke puree.

What parts of your food sensibility are you looking forward to sharing beyond the weird science-y stuff?
I would love be able to show people that I can cook a good meal with just a pat of butter, a saute pan, a piece of fish and some vegetables. Everything's not all about liquid nitrogen. I want this to be a restaurant where people eat every day, not a fine dining restaurant or special occasion place.

How about the people who want the modernist techniques from you?
We're doing a tasting menu and calling it 4 x 4, so it'll be four plates and four snacks for $69, $96 with wine pairings. It'll be different from the regular menu and we're just going to go for it.

We're also doing a tableside cocktail that will feature nitrogen and cooking sous vide; all of that modern stuff is here, we just don't like to talk about it that much.

How much can you feasibly be in the kitchen?
As much as I can. Honestly, I'm still doing a lot of television and there are new projects on the horizon but I'm pushing a little harder physically to make sure that I'm in the restaurant as much as possible; there's an old French Laundry saying, "sleep is cheap". But I'm going to be on the ground here a lot, I live here.

I also have my chef de cuisine Jon Sloan, Brad Chance, who I brought from Atlanta, and Anthony Wells, who just came off stints at Meadowood and Per Se. These are hard core, dedicated and serious people.

A year from now, when we do the feature Eater calls One Year In, what do you hope we're talking about?
Restaurants grow and evolve, so I hope we're a year better. Hopefully I'm saying that it's the same restaurant I envisioned going into this, and that the local market is celebrating our values, ingredients and products. Hopefully we're still doing the tasting menu because we're making a commitment to that. Hopefully we're not just talking about Juniper & Ivy but also other restaurants that have come about maybe because of us pushing things a little bit.

I don't think I'm the best chef in this city but we'd like to start a delicious conversation. If that conversation leads to other chefs getting funding to do projects with the kind of food they really want to cook, then that's great.

Will you do other projects in San Diego?
I have a restless mind. I don't think there will be another Juniper & Ivy but I live in North County so maybe there's something up there. This is a bigger restaurant, so at some point I would love to do a 25-seat restaurant that doesn't make any money. but finding an investor for that probably won't be easy.
· Juniper & Ivy [Official Site]
· All Juniper & Ivy Coverage on Eater [~ESD~]