Tacos and more to surf their way to La Jolla Shores.

Share All sharing options for: George's at the Cove to Take on Tacos for Second La Jolla Restaurant

Twenty years after first opening in downtown La Jolla, the partners from the esteemed George's at the Cove are putting their significant experience and expertise behind a new restaurant.

Galaxy Tacos is headed for the beach neighborhood's main thoroughfare; the 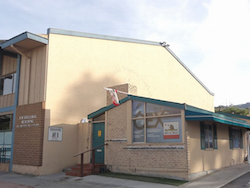 CRBE's Jim Rinehart, who was instrumental in securing the lease, said, "The building has been empty for approximately three years; this concept will draw energy back to the corner and help to link the walking, shopping and dining traffic up and down the street."

Foshee, who has been with George's since 1999, travels regularly to Mexico and says that Galaxy will be inspired by the sense and sensibility of Baja; it will be faithful to the food of the region, right down to grinding their own masa for making authentic tortillas, but with Foshee's own culinary spin. His kitchen has already been interpreting everything from fish tacos to birria on their California Modern and TBL3 menus and the chef told Eater that his menu for Galaxy will be "just as thoughtful but not as serious".

A longtime champion of local produce and seafood, the chef also helped to curate a recent taco tour through San Diego for Food & Wine magazine. He says the new restaurant will be fun and casual, with a full bar focusing on tequila and mezcal and a menu that will range from cold seafood dishes to salads, seasonal hot appetizers and eight varieties of tacos; the dinner menu will expand to include sharable entrees, from whole grilled fish to half chicken.

Galaxy Tacos is scheduled to open by April/May 2015.