Stone Brewing Co.'s Greg Koch is Going On a Walkabout

Share All sharing options for: Stone Brewing Co.'s Greg Koch is Going On a Walkabout 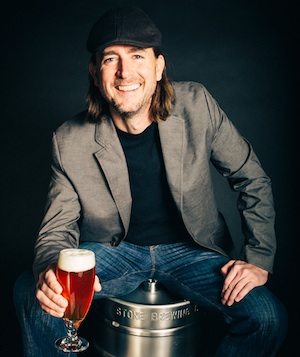 Greg Koch, the dynamic CEO and co-founder of Stone Brewing Co. is headed on a walkabout. Koch, a prolific Twitter user (@StoneGreg), is going off the grid for an extended journey to parts unknown; Eater caught up with him for a brief chat before he departs on sabbatical, to find out what he'll miss about San Diego and his work at Stone.

How are you feeling now that your date of departure is drawing near?
Feeling fine, there's lots to do. In a way it feels different, but in a way it doesn't.

Do you have itinerary already set for the next six months?
It's actually going to be four months...we've got a loose outline for the first two and a half months and then it's not certain after that.

Are you doing any beer-related projects while you're away?
No, it's not a beer-focused sabbatical although if I get near a small brewery or brewpub, I have a feeling I'll be dropping in for a beer.

What's the plan for the company while you're away? Will there be big projects to tackle?
There's always big projects we're tackling; there's always a lot going on and sometimes you just have to say, "I'm going to go even if it's a bad time to go, because there's no good time to go."

What will you miss about the work?
Four months isn't enough time to miss anything; I'm not retiring or going away for a year. From the first time I went to summer camp, I have never been homesick; I've never been anxious to return or unhappy to return. I'm always fine wherever I am, unless I'm in a place that sucks.

What will the company miss, or not miss, about you?
I'm the guy who is always looking at things from a lot of different angles and saying we should do things this way or that way, so in some ways I think they're looking forward to just being able to put their heads down and focus.

Are you going to have Twitter withdrawl?
Let's see, not staring at a little screen every couple hours to check on things? Yeah, no.

Expansion-wise, are you sticking with company stores, or are you thinking about something new?
We're considering looking at opening company stores outside of our area but we're not looking to do more of them in San Diego. We have a lot of irons in the fire right now; increasing our production is our main emphasis.

You've been working to try and foster more beer tourism in San Diego...what's the next step?
The next summit is February 4, just before I leave. It'll be at the Sheraton Harbor Island, much bigger than the last one, and will specifically include decision-makers and owners of bars, restaurants, markets, hotels, etc. It's about getting everyone in the same room and on the same page; we all know that we have the world's leading craft beer environment here, so how do we make it a part of our culture to everybody's mutual benefit?
· Stone Brewing Co. Official Site
· All Eater Interviews [~ESD~]