Meet the Man Behind Lucky's Golden Phenix, Who Knew North Park Would Be Cool Long Before It Ever Was

Share All sharing options for: Meet the Man Behind Lucky's Golden Phenix, Who Knew North Park Would Be Cool Long Before It Ever Was

Welcome to Lifers, an Eater feature with the men and women who have worked in the restaurant and bar industry for the better part of their lives, sharing their stories and more. 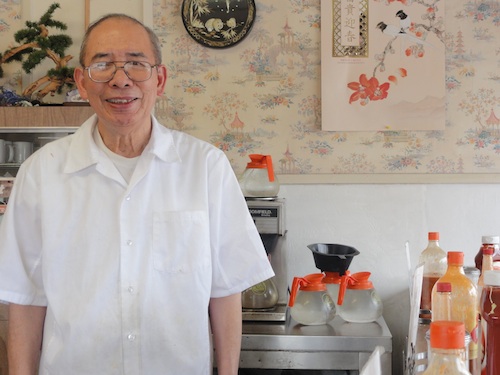 Forty years ago, when Lucky, the proprietor, chef and namesake of Lucky's Golden Phenix first opened his eatery on Grim Avenue, his friends thought he was crazy. No one would ever come to North Park, they said, but Lucky liked the neighborhood even way back then and figured that his restaurant, which originally served Chinese food, would help bring people to the area.

Asked about North Park now and Lucky smiles with shy pride, calling North Park "the center of San Diego" and predicting that the neighborhood will soon "take the place of downtown". Lucky first landed in San Diego in 1949, brought by his grandfather from the Chinese city of Taishan when he was just 11 years old. He's seen the city change dramatically in his six decades here, but while North Park booms, Lucky's Golden Phenix resists the tides of change. His says the business stays the same in deference to his longtime customers, and estimates that he's adjusted the prices at the cash-only spot just a few times since first opening so long ago.

Inside the corner 'spoon, a winding and worn counter lined with creaky diner stools gathers a range of faces from the community who all seem to be regulars, whether they've been coming for three years or 30. Knick knacks collected over a lifetime mingle with vintage diner equipment; folksy Chinese music provides ambient sound.

The eatery used to operate through the evenings and offer a large menu of Chinese American dishes, but since Lucky "retired" they just serve breakfast until noon. The food is very basic and no-frills, but serviceable and cheap. A full breakfast runs between $3 and $4, and Lucky will sometimes throw in an extra pancake and chide you into cleaning your plate.

He also moves faster than his age belies and is virtually a one man show (he's occasionally assisted by his wife); Lucky takes every order and cooks each breakfast, all while ensuring that the level of coffee in your mug never dips too low.

The omelettes are fine, but patrons come more for the company than the food, and Lucky likes talking to his customers. He says that he hopes to continue feeding North Park for as long as he can, and fortunately the building's landlord also seems to appreciate his presence. After several breakfasts, you'll develop a fondness for this plain-speaking and no-nonsense, yet kindly, San Diego stalwart who gifts you with fortune cookies and scolds you if you try and tip too much.

Where to Find Rosh Hashanah Dinners in San Diego, 2022