Your favorite feature is back; it's time for Shit People Steal, where bar owners and restaurateurs tell Eater San Diego about what gets pilfered from their establishments. Send your own story our way. 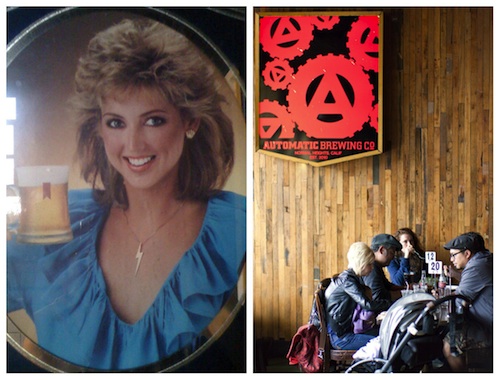 Blind Lady Ale House and Tiger!Tiger! co-owner, Jeff Motch, sent us a dispatch about two rather large, unwieldy and un-stealable (you'd think) items that have been taken from their establishments. One was subsequently returned, the other's still missing in action.

We'll let Motch tell the saga in his own words, "The Michelob lightning bolt mirror originally hung above the urinal in the men's room at Blind Lady. I hung it there to give guys something nice to stare at while...you know. Apparently it was too nice; the guess is it was a drunk Chargers fan who became a little too enamored with the bolt necklace she's wearing and just had to have her. Bummer is they probably broke her trying to stick her in their pants on the way out."

Motch went on to tell us a Bad Idea Jeans story about some dolt who stole their 5-foot tall Automatic Brewing Co. sign from Tiger!Tiger!; he shares, "How they heck did they get that out of the building? The funny thing is the guy brought it back the next morning because he was ashamed, he even offered to pay for it since he broke the corner off trying to get it out of the building. I told him not to worry and that I was super impressed that he didn't just chuck it into a dumpster in a hungover haze. The sign is now permanently mounted on the wall at Blind Lady."
· Blind Lady Ale House [Official Site]
· All Shit People Steal on Eater [~ESD~]