The Early Word On Great Maple

Share All sharing options for: The Early Word On Great Maple 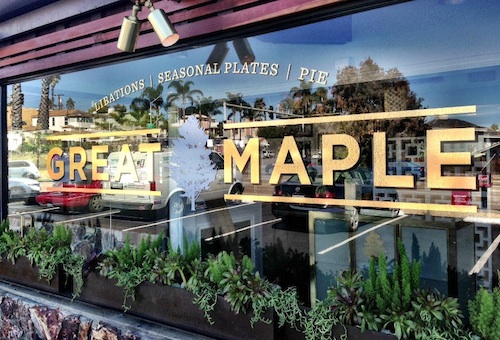 The golf leaf-adorned Great Maple may be located in Hillcrest (see the restaurant's beginnings in our Plywood Report), but its retro-glam vibe — accented by an original stone facade, mid-century Modern touches and sleek patio — keeps patrons guessing where the pool and Frank Sinatra are hiding.

A lineup of the day's specials, scribbled on chalkboards along the wall, range from rotating pies to fish dishes. Johnny Rivera, of Fifth Avenue's Hash House A Go Go and The Tractor Room, grows large portions at Great Maple (think a deep-dish turkey bolognese) from variety of geographic origins, ranging from an East Coast pulled pork sandwich to a pan seared Scottish salmon.

Try mini ($5) or full ($11) gin or vodka cocktail concoctions; the buzzed-about Honey Mule is a sippy cup for adults; the potent drink comes in a bear-shaped glass mug.

The Sweet News: One Yelper called the plank of passed $1 maple bacon donuts "the perfect little appetizer to split, and it was great to eat something within seconds of sitting down! We split the asparagus/lemon/egg appetizer and lamb burger. The asparagus dish was really flavorful and light. The lamb burger was a little boring, but the meat was moist, bun was super soft and the truffle fries were delicious. Also loved the cornichons that came with the burger." [Yelp]

The Not-So-Much News: Another Yelper with two stars was less than impressed: "I won't be returning here unless dragged. If I want an overpriced burger and fries, I have the Farmhouse Cafe nearby. If I am dragged here, I'll get a bowl of soup and a glass of wine, and I won't sit anywhere but the patio, where at least you can hear what your dining companions are saying." [Yelp]

The Comfort Food News: The U-T's Keli Dailey says, "This new spot has the warmth of a Canadian ski lodge, which might explain why a staple of the Great White North — a soupy, french-fry dish: poutine — is on the menu with lobster chunks here. But try the portobello fries, eh?" [U-T]

The Tongue and Eye Candy News: Sounds like this tipster found his happy place: "I had their pork belly hash special sans cheese. It was pretty darn good, large portions, cute girls, overall great atmosphere. I must say this place is not as approachable as Brian's was." [Four Square]

The Snubbed News: Another Yelper got a cold shoulder vibe from the staff. "Walked in and the receptionist was on the phone and continued talking on the phone for several minutes, without acknowledging our presence. Finally she hung up the phone and looked rather stunned that she actually had to be more present in the moment and seat two customers." [Yelp]

The Squashed Expectations News: This Facebooker would rather eat at Rivera's tried and true joints. "Had the Scramble with zucchini, sun dried toms and onions. I think the food at Tractor Room is much better. Do wish they had more vegetarian options, but I don't think that is what they are about. Also felt the prices were high. ?May try it again for dinner sometime but won't be rushing back for brunch or breakfast." [Facebook]

The Quest for the Perfect Side News: Sounds like The Reader found it. "Venison chili ($19) tasted like beans and meat, simmered for a long time. It was pretty good, but it was still just a bowl of chili. The thing that really stole the show was the grilled cheese and fig sandwich that came alongside. Labelled as "mini" on the menu, it was anything but. Drenched in butter and exploding with cheese and figs, it was a near-perfect example of the grilled cheese." [SD Reader]
-Tierney Plumb
· Great Maple [Official Site]
· Great Maple Rising In Place Of Brian's In Hillcrest [~ESD~]

Bringing a Mexican Perspective to Sushi and Japanese Cuisine, El Pez Is Opening in Barrio Logan

55 New Restaurants and Bars That Have Opened in San Diego