Well hello, it's Industry Dish, a bi-weekly feature on Eater San Diego. In this space, our town's restaurant and bar pros weigh in on their favorite eats and drinks, give their thoughts on local food trends and talk about what it's like to work in the San Diego community. Know a chef or bartender who wants to do some sharing? Let us know. 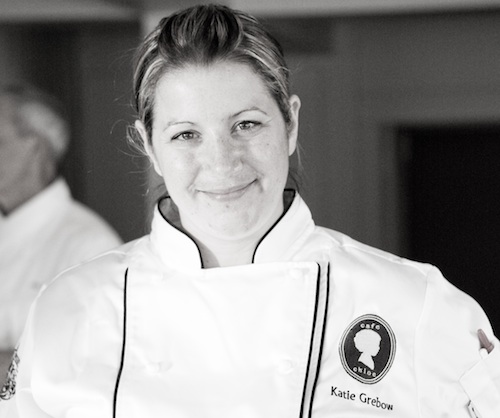 Chef Katie Grebow has been in the restaurant industry since she was a teenager; she earned an art history degree in college before deciding to attend the California School of Culinary Arts in Pasadena, where she completed the school's Cordon Bleu program with top honors. Grebow worked in the kitchen at Rice at the W Hotel before joining Cafe Chloe, where she chooses to work with regional and sustainable ingredients for her rustic, French-inspired menu.

What's your favorite thing on your menu right now and why?
A couple new dishes that will run for several weeks are the salade aux gésiers confits and the choucroute garnie. I like both of these items because they incorporate the idea of sustainability within meat.

Despite the choucroute garnie being an obscene platter of meat, its origins are based on using leftover meats, as in pork knuckles, ham hocks, belly, and the tough meats that can't be eaten without being ground into sausage meat. In modern interpretations, the smoked hocks and what not have been replaced by a more favorable cut of loin or shoulder. The belly is now so popular that it's not as underutilized as it used to be, but basically serving lesser used parts of animals is a way to waste less and being more sustainable.

The above-mentioned salad is a confit of gizzards, a part of the poultry that is often just thrown in the trash. But in Dordogne and Perigord, where poultry is king, these parts are preserved in duck fat, to be consumed at any time in a quick salad as a first course to the more appreciated cuts of the animal served in the entree course.

Where do you eat when you're not working?
I am really into going to places like K Sandwiches, or Cali Baguette and getting the baguette sandwiches (usually the seafood ones) and Vietnamese coffee or fresh squeezed cane juice. I also like going to Prepkitchen and getting a bunch of appetizers.

Anything that you're "over", in terms of played-out restaurant and food trends or ingredients?
I am slightly over the Brussels sprout trend. While they are delicious, it annoys me that there aren't other vegetables getting the same treatment, being featured as a dish on their own with all these regal garnishes. Plus, they are not being served in season, but year round, and not from local farms. Why not feature a vegetable that's grown locally? We have a vegetable du jour on the small bites part of our menu; we try and mix it up and feature different things, but we always keep it vegetarian and I'd say 90% of the time, the produce is local and comes from Suzie's Farm or Crows Pass Farm.

Do you have a wish or request for the San Diego food scene or local diners?
My request for San Diego diners is please try our dishes as they are written on the menu. We get requests for substitutions that don't make any sense. For example, we have a very simple breakfast dish; it consists of two eggs, bacon, baguette and herb butter. People will ask for beets instead of the bread, the house salad instead of the bacon and a slice of brie instead of the butter. The plate is garnished with a couple of tomatoes, but people will ask for strawberries instead, and we don't always have things like brie and strawberries in house.

We try to accommodate a lot of this, but the problem isn't that it bothers the staff, or that the price difference does not work in our favor, it's that these requests slow the kitchen down and make the wait for food longer. At brunch, we'll get tickets in the kitchen for a table of eight that have special requests on seven of the items, and it will take the lead cook a couple of extra minutes just to read out the ticket to the rest of the line. Then it takes even more time to coordinate and check back with the ticket to make sure all the specific requests are correct: to make sure that the over-hard eggs with crispy bacon does not get mixed up with the over-medium eggs with extra crispy bacon, or that the omelette with mushrooms subbed in isn't mixed up with the no-cheese omelette cheese with oranges on the side. Basically, a wrench gets thrown in the gears of the machine that needs to perform fluidly in order to accommodate the numbers that come in for our brunch. Despite all this, I am so grateful for being so busy and beloved for our brunch.

One more thing: the allergy card should only be used for allergies. We're happy to tell you if there's garlic in a sauce and use something else instead if you just don't like the taste of garlic. But when someone has an allergy, we have to use completely different bowls or fire a pan of ingredients separately to leave out one item, even when we're firing four portions of one dish at a time during busy periods. We go to great lengths to avoid allergy contamination, because people can die. But if you simply don't like tomatoes, just let the server know to leave out the tomatoes.

What makes cooking here different than other cities you've worked in? How is San Diego unique as far as the restaurant/chef community?
I love the camaraderie in San Diego, that's why I moved here from Los Angeles after I graduated college. I always wanted to be in a smaller community than in a huge metropolis with so much competition. In this city, everyone is happy to help someone else out, or offer advice, or offer an extra bag of towels when you fall short on Sunday. Evidence of this is the Cooks Confab, a collaborative group of like-minded chefs. I love this community!