Share All sharing options for: The Linkery's Odette Cressler on Service & Staff

Welcome to The Gatekeepers, a feature in which Eater chats with the men and women who command the front of house at some of your favorite restaurants. 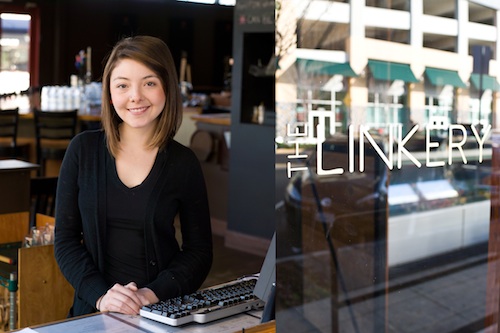 In this installment, Eater sits down with Odette Cressler, a native of Guadalajara, a North Park resident and the new manager of The Linkery. Cressler joined the restaurant in January, and supports The Linkery and El Take It Easy's owner Jay Porter, who now splits his time between San Diego and San Francisco, and Michael McGuan, the restaurants' operations manager and a Good Food Award winner. Cressler, who previously managed downtown's Croce's, tells us about The Linkery's approach to service and some related changes that are being made, and shares her pick for the best Tijuana taco shop.

What are some differences between working in the Gaslamp and in North Park?
What's been been very rewarding for me here is getting to know the regulars. The Linkery's a big part of the North Park community and it's been so nice to get even more in touch with the neighborhood and the people that come here. We do get tourists, but it's not a touristy area so that's the biggest difference. The pace is different...the people coming here want to eat, but they also want to have a conversation. Downtown is more fast-paced, and people are always in a rush. People pick where they go downtown by what they first see or what looks good; I feel like coming to the The Linkery is more of a choice and people think ahead of time about wanting to join us, which is nice.

Do you have some favorite regular customers?
On Monday nights we always do our Sausage Night in America, when you can get a sausage and half a pint of your beer of choice for $8, and there is a regular named Jordan who comes in every Monday and has three to four sausages and beers. On a recent Monday, he had another dinner planned but he still decided to come in, just a little earlier, to try the new sausages and beers. Because we rotate our links and our beers frequently it works out, so even if you are a regular there are different options all the time.

What are the busiest nights here? And the most quiet?
Fridays and Saturdays are normally the busiest but it really depends on what event is going on here or in the area. It can get busy on a weeknight when we have 30th on 30th, or Ray or Night, or when there's a performance at the North Park Theater.

I would say Sunday and Monday nights are quieter, I've gotten to know some regulars who bring in their kids on Sundays.

What's the wait for a table on a busy night?
Normally it's 10 to 15 minutes; it's really nice that we have two tables up front where guests can have a drink or an appetizer while they wait to make it more enjoyable. And we have a high bar and a low bar where we can do full dining too.

How would you describe The Linkery's style and approach to service?
People that come expect a certain level of service. We have a "no tipping" policy and a 18% service charge is already included in all of our checks, which raises the bar for our staff and our guests. We really pay attention to service and try to train our staff to be equally attentive to everyone. It's casual and relaxed, but with the steps of service of a formal restaurant.

The restaurant has taken some heat for the policy. How do you explain it to customers?
What's so important to me is that our staff asks every person that comes in if it's their first visit. That's crucial. We do this not only because of the service change but because our menu has so many options, so we like to explain everything from the get-go. Every time a server drops off a check, they must explain the policy. If the guest didn't like the food or isn't happy with the service, we will remove the charge. What's important for us is good communication with the guest.

Can you explain where that 18% service charge goes? How is it split?
It goes into the salary of all our employees. We're not like a typical restaurant that, at the end of the night, cashes out their servers with tips. So everyone gets a share of the service charge in their paycheck, both front and back of the house; it's distributed proportionally amongst the whole staff. If a guest wants to add on an additional tip above 18%, that extra portion goes to a different local charity every month.

What's the philosophy behind the policy?
All of our staff is working for the same purpose; every team member is concerned about every guest. You do have to hire the right person who agrees with this mindset, we're not for everyone and not everyone is for us, as in every restaurant. So it's nice to see everyone here helping each other.

Since starting here, have you instituted any changes?
I really like photography and writing; we have a great blog, and people like to read Jay's entries but I would like to encourage the whole staff to write entries and take photos to feel more a part of this Linkery family. I've added some steps of service changes too, it's all about teamwork and hospitality. I want to focus on engaging dialogue with the guests and talking to them about us.

What's your favorite dish here?
I love the locavore pizza; the produce that's on top of it changes often and we get the vegetables from Suzie's Farm. It has a thin crust that I like and the pesto we make in house is delicious.

How about to drink?
It's really dangerous working here because we have so many great beers. I started working here in January which was Craft Beer Month for us, so we had Tap Takeovers from Green Flash and lots of new beers so it was really interesting. There are so many great craft beer places just in this area, I can't get enough of Tiger!Tiger! too.

Since you've also worked at restaurants in Mexico, what do you think about San Diego's growing interest in food from the area and the chefs working there?
I love it, it's been really great to see what's happening in Baja and Tijuana. It's been really rewarding because the country has great potential; there are lots of obstacles..political, economical..but it's great to see entrepreneurs moving forward with projects and making that happen.

There's a taqueria in TJ that I highly recommend called El Frances. Their tacos are amazing but the salsas are what make it really special. I think most Mexicans would agree that it's all about the salsa.
·The Linkery [Official Site]
·All Gatekeepers Interviews on Eater San Diego [~ESD~]