Hey there, it's Industry Dish, a bi-weekly feature on Eater San Diego. In this space, our town's restaurant and bar pros weigh in on their favorite eats and drinks, give their thoughts on local food trends and talk about what it's like to work in the San Diego community. Know an industry pro who wants to do some sharing? Let us know. 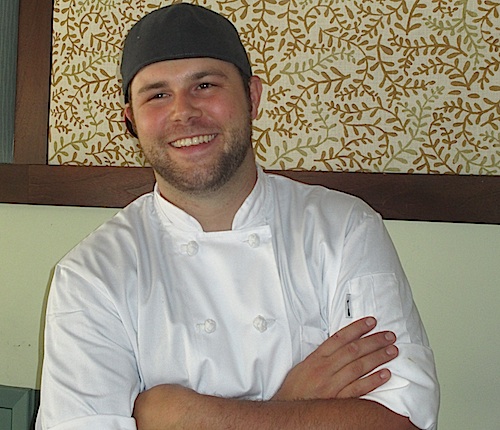 A new import to San Diego, Exec Chef George Morris joined Beaumont's Eatery in Bird Rock last fall. Trained at New York's Culinary Institute of America, Morris' first job out of culinary school was at the renowned Spiaggia in his home town of Chicago; he's cooked in kitchens throughout Chicago, NYC and most recently, Colorado. Here, he tells Eater about his culinary style, where he likes to eat off the clock, and how he really feels about foie gras ban.

What's your favorite thing on your menu right now?
That's a tough question to answer. It's kind of like asking a lingerie model what her favorite body part is (which, by the way, is the next career path I'm considering). But since I have to pick, I would say the 3 Way Jidori Chicken is my favorite. I like it because a) Jidori Chicken is delicious and b) because we implement a few different cooking techniques for the protein. The wing is smoked, the leg is confit then deep fried and the breast is sous vide, then pan roasted. It is served with goat cheese smashed potatoes, Blue Lake beans, and a bacon gastrique. I like that it comes across simple on the plate, but is actually a pretty technical dish.

Where do you eat when you're not working?
There are a lot of places in San Diego that I love. I usually end up at hole in the wall places like Yakitori Yakyudori on Convoy or Tacos El Gordo. But the place that I find myself at the most is Sushi Ota. It's the one place I can count on, that always lives up to its hype. I can't say that there is one thing that I like to order there because I usually just tell the chef how much I want to spend, and let him do his thing.

Anything that you're "over", in terms of played-out restaurant and food trends or ingredients?
I'm over the foie gras ban. I think it's hypocritical because the way that a lot of corporations raise their chickens, cattle and pork is much worse that the way foie ducks are treated. People attack it because it's a luxury ingredient, but it's unfair that small foie gras farms in California have been shut down because they don't have the same money to protect themselves as popular big corporations do.

Do you have a wish or request for the San Diego food scene or local diners?
I think most chefs will agree, we would appreciate if people would simply order what is on the menu. Ultimately, we are in the business of making people happy and we want to give customers what they want. I want customers to leave happy, having enjoyed their experience. As chefs, we work carefully to balance the flavors and textures of every dish, so it becomes frustrating when a customer slices and dices a dish until it's something totally different, and then sends it back because they don't like it. I always try to make food that I think the customer will want to eat. It's more about that than what I like or want to cook.

What makes cooking in San Diego different than other cities you've worked in?
It's always different when you move to a new place because each dining community has special qualities. At this point, I've cooked in NYC, Chicago, Steamboat Springs, Colorado and now, San Diego. I've learned a lot, worked with a lot of really talented people, and have had ups and downs along the way. Yes, every city has had its differences but they all have taught me three important lessons: 1) it takes a lot more to be a chef then just being a bad ass cook that is skilled and creative, 2) we are not artists, rather craftsmen and 3) at the end of the day all cooking techniques come down to three basic things - water, metal, and fire.. so get over yourself, Chef.