Welcome to Lifers, an Eater feature that shares stories from the men and women who have worked in the restaurant and bar industry for the better part of their lives. 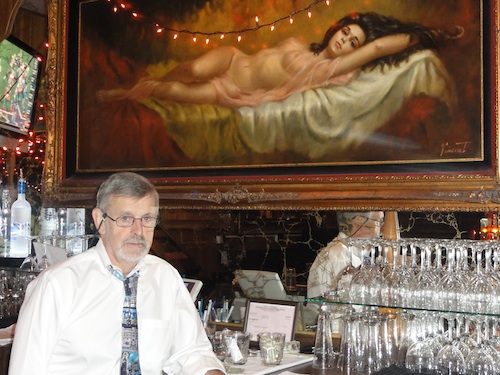 Fred Graslie has worked as a bartender for over four decades, spending the past 22 years behind the bar at Albie's Beef Inn, the Mission Valley steakhouse and cocktail lounge that's been open since 1962 in the parking lot of a Travelodge.

The questions he fields most often relate to the paintings that line the dimly-lit lounge's walls, depicting voluptuous ladies in various states of undress. As the story goes, an artist buddy of the original owner used his wife and her friends, some of them stewardesses, as models for the paintings; Graslie says that in all his years, only one person has complained about them.

He speaks wistfully of the passage of time, and the disappearance of the "two martini-lunch", when businessmen used to patronize the bars in Mission Valley or start their day with a Ramon Fizz at the adjacent Adam's Steak 'N Eggs which serves cocktails with your breakfast. Though Albie's crowd has remained steady, Graslie says that in recent years he's seen a younger set move in, which he doesn't mind since they tend to order more of the top shelf spirits and generally "behave themselves".

His regulars, now in their golden years, frequent Albie's for its live entertainment; to croon a classic tune at the piano or take a spin around the dance floor. Sometimes they'll eat from a menu of throwback dishes that include steak Diana, shrimp cocktail and chicken fried steak; Graslie himself eats the chicken parmesan, prime rib, halibut and filet mignon at least once a week.

Calling Albie's "the last dinosaur bar of its kind", Graslie talks with fondness about the friends he's met on the job and the one night, years ago, when a longtime customer finished his drink, got into his car, and accidentally accelerated straight into the Travelodge pool.

The 67-year-old Graslie, who still works six days and four nights a week at Albie's, says he'll retire from the bar eventually, but insists that it's not quitting time for him just yet.
· Albie's Beef Inn [Official Site]
· All Cocktail Week Coverage [~ESD~]