The venerable Pink Lady of La Jolla's got a new man in the house, Executive Chef Paul McCabe, who joined La Valencia last November to head up the hotel's culinary operations . McCabe, a 12 year vet of local kitchens, came to La Valencia from Delicias — before that, he made a big impression at L'Auberge Del Mar's Kitchen 1540. Eater San Diego caught up with the chef to learn about his plans for updating the food at all of the hotel's eateries and get his thoughts on the San Diego food scene.

What prompted you to leave Kitchen 1540 and move to Delicias?
I've been in small four or five-star boutique hotels almost my whole career. I've only ventured outside of that to free-standing restaurants three times: Top of the Cove, when I first moved to San Diego in 2001, Star of the Sea and Delicias.

I was at L'Auberge (Kitchen 1540) for seven years, it was a great run. I have an entrepreneurial spirit; I think that's why I'm attracted to conceptualizing, re-designing, re-launching — it's what I love to do. Owning my own place was always in the back of my mind, and then the Delicias opportunity happened. It sounded great to have ownership in not just Delicias, but multiple restaurants. There was definitely risk involved, but I needed something else stimulating. Kitchen 1540 was set up, it was running smooth — a well-oiled machine — and I was kind of like, "what's next"?.

So I went for it and after some adjusting, I think we did a good job there. The restaurant became relevant again. Then at a point, I realized that I'm not a stand-alone restaurant guy; I need to be in hotels, that's where I'm most comfortable. Delicias was the third time, and the last time. I say the last time, even though I never close any doors. But I like the structure and stability of hotels.

I have multiple things going here at La Valencia, that keeps me very interested. One restaurant's just not quite enough. But I didn't go to Delicias for just one restaurant.

I did some soul-searching and after 28 years of being in kitchens, I think I've come full circle and figured out what I love. I'm lucky that the timing was right and this was open, and it's been great ever since. 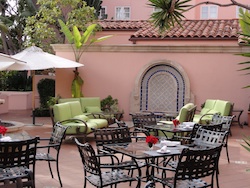 What kind of changes have you made since starting at La Valencia?
So far it's been a lot of infrastructure, everything from putting together a culinary operating manual to creating job descriptions — building the foundation of this department. I'm overseeing purchasing, so we've made a lot of changes in that area.
I've been meeting with every member of the staff, one on one, to get to know them and articulate my vision of where we're headed.

And now I'm getting into the fun part of menu development. We just got done designing the kitchen for La Rue, the new cafe which will replace the Whaling Bar. I'm also getting ready to do a first change in the Mediterranean Room, eventually we'll add a new patio, remodel it and add a private dining room. The menu change I'm doing now is kind of an introduction for the cooks, so I can get them thinking differently about food. The next incarnation of the Mediterranean Room will probably come with a new name and the level of food's going to stepped up quite a bit.

Is there an over-arching concept that you have for the menu at both spaces? Will the food be recognizable to the people who know your style?
That's something we're still figuring out. Throughout my career, the most fun times I've is reinventing myself as a cook — things are always evolving. But there will be a common thread.

What's going to happen to the Sky Room space?
It's really dependent on permits. For now, we'll use it for special events or maybe open a sweet shop.

This hotel has a lot of history, a lot of regulars...are you anticipating some blowback with the remodel?
Absolutely, more than anywhere that I've been, people here love things the way they are but I know that we can do a lot more. But we're really sympathetic, and want to assure them that they're still going to like it. It's still going to be comfortable and have class. 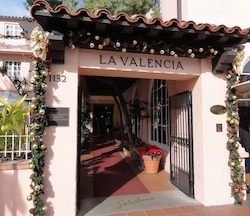 What kind of physical changes can we expect?
Well, this is the Pink Lady, so it's going to stay pink...we're redoing every room. Eventually we'll do the lobby too and we're building a spa. We're not going to shut down, but the renovations will be on-going thing for 2013.

How would you describe San Diego restaurant culture? Where it is going, what are its short-comings?
Collaborative. There's a few individuals in town who inspire the direction of San Diego cuisine, Trey at George's, Jason at Nine-Ten. Right now it's very artisan, everyone's making their own salumi — Jack Fisher's making cheese at Cucina Urbana. The whole local farm thing is great and it's exciting to start seeing more land animals being raised locally.

I'd like to see continued growth. I've been here since 2001 and people have told me, again and again, that in five years, San Diego's going to be known for food. I kind of held onto that until the last couple of years — why do we have to be San Francisco? What can't be just be ourselves? I'd like to see us not copy trends, but pave a new path as San Diego. I think there's potential there.
· La Valencia Scores Paul McCabe [~ESD~]
· La Valencia Hotel [Official Site]