Welcome to Chef Imports, Eater San Diego's new interview series with chefs who have recently arrived on San Diego shores, or who have come back in our city after working elsewhere. Know a chef who's new or newly returned to San Diego? Send us a note. 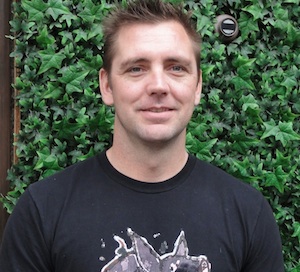 Earlier this month, Chef Mike Kessler joined Craft & Commerce as their new Executive Chef. Kessler started as sushi chef at local San Diego spots, from Hillcrest's Ono Sushi to Aubergine in the Gaslamp. In 2007, he moved to Las Vegas to work in several prominent hotels and restaurants, including Masayoshi Takayama's Bar Masa. That group brought him to New York, and from there, he spent time in the kitchens of Chef April Bloomfield's John Dory Oyster Bar and The Breslin, and served as a sous chef in Masaharu Morimoto's bustling Chelsea restaurant. Last year, he spend several months cooking in Portland before returning to San Diego in September. The chef sat down with Eater to chat about his plans for the menu at Craft & Commerce and how food in San Diego has changed since his time here.

Why did you decide to come back to work in San Diego?
The weather. I really liked New York, but the first winter after I got there was so horrible. It hadn't been that bad in 25 years. I put up with it for as long as I could. When I was working Portland, it rained on the 4th of July; I almost cried. Coming from San Diego, it's just not allowed to do that.

When you were thinking about coming back San Diego, did you have something specific in mind?
I trailed at at a few different places and kind of explored my options. The thing about this town is that you have restaurants that are really busy on a Friday and Saturday night and then the rest of the week it's just a struggle to get covers. At the end of the day, I picked out six places that I wanted to work and Craft & Commerce was one of them. It's a super happening spot, they have a great cocktail program, and they have the potential to move a lot farther forward with the food.

I hope to see something that would be similar to a place from April Broomfield or David Chang, or something like Blue Ribbon. I think a casual approach to upscale cuisine is definitely where San Diego food is headed.

Have you made any changes since you've been here?
Th first thing I do when I'm coming into a kitchen is to clean it. Now, we're starting to move forward with food ideas. The first is redoing the brunch menu. My favorite breakfast is Southern food. We're talking about pain perdu (French toast), shrimp and grits, things that San Diegans won't be afraid to try.

How about the dinner menu?
We're streamlining our lunch menu right now and then going into dinner. The owners are really actively involved with the food; we meet once a week and talk about what's working and what's not working. We take a dish and dissect it - is it worth fixing, or could we replace it with something better? Let's make it perfect if it's going to be on the menu, and be able to do it well when you have 400 guests in for dinner a night. It's a pretty daunting challenge but I'm excited. We've talked about going towards a seasonal menu that changes four times a year; we're talking with local farms about produce and going more local with our choices in egg and meat. I'd like to see us move forward with that.

With your experience with seafood, is that something you'd like to see more of on the menu?
I would definitely like it to, I don't think there are enough strong seafood dishes on our menu right now. Especially here in San Diego, people are pretty comfortable with it.

In the other cities you've worked in, what do people think of San Diego?
They call it Bland Diego. Everybody looks at us like we're all from the Anchorman movie.

Have you noticed that things have changed since you left?
Completely. There lot of smaller, casual but upscale places like Alchemy, Tiger!Tiger! and Blind Lady Ale House and Jayne's Gastropub. They're comfortable but still doing nice food. You look at our other competition in town and everyone's trying to find a cool ways to take new products and make them accessible.

Have you found a chef community here?
I instantly come back to the sushi community because it's so small and tight here. As far as other chefs, there's not a place where you go after work and see everyone from the industry there. There's no hangout, or something like a chef's club.

Where do you go for sushi here?
I went to Hane Suhi and liked it. The sushi technique was good, and they had a great fish selection with a lot of special things that aren't on on the menu. I didn't see any spicy mayonnaise on the menu or other old hat stuff that are portents of a lower quality sushi restaurant.
· Craft & Commerce [Official Site]
· All Interviews on Eater San Diego [~ESD~]