Welcome to Industry Dish, a new bi-weekly feature for Eater San Diego. In this space, our town's restaurant and bar pros will weigh in on their favorite eats and drinks, give their thoughts on local food trends and talk about what it's like to work in the San Diego community. Know an industry pro who wants to do some sharing? Let us know. 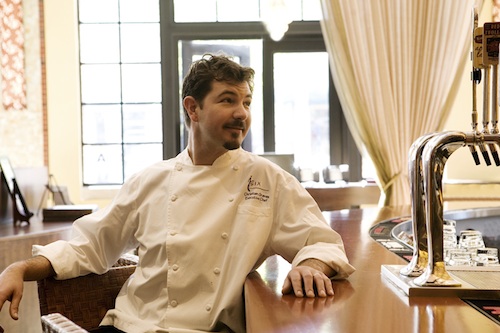 In this installment, we catch up with Christian Graves, Executive Chef and General Manager of Jsix in downtown's Hotel Solamar. Graves cooked in some of San Francisco's top kitchens, including Aqua and Farrallon, before arriving in San Diego. He's also an accomplished home brewer and charcuterie-maker, and recently served on the judging panel for the Good Food Awards.

What's your favorite thing on your menu right now?
We have a dish called fried bologna and gnocchi. It's pan seared mortadella with house-made gnocchi. It has crispy leeks on it which gives it a little texture. It's a little white trash, a little scratch cooking and a whole lotta delicious. As always we are trying to work in traditional methods but not take ourselves too seriously.

Where do you like to eat?
I've been going to Leroy's Kitchen + Lounge for lunch lately. I usually meet friends for beers here, but I've started having lunch dates with my wife while the kids are in school on my days off. Greg (Chavez) has a very delicious persimmon salad.

Hanis Cavin's Carnitas Snack Shack has been my dirty little secret. I do love the hogs! The pork belly is blindingly good. Nine-Ten is always a go to as well. Jason Knibb is by far the best chef down here, I have always enjoyed his take on food.

Grabbing drinks at Cusp is great as well. Nate is a great bartender with a lot of class and he's amusing. It's fun to see him play around with people at the bar —
the view is worth taking the ride to La Jolla too.

Downtown, the only place I really eat aside from Jsix is Gaijin. I like to head over after work and get the pork with kim chee or if I'm feeling beat up, I mend my soul with a bowl of noodles. Antonio Friscia must put medicine in his stock cause I am always ten times happier leaving than when I arrived. Other than that, the best food in town is at my house!

Anything that you're "over", in terms of played-out restaurant and food trends or ingredients?
I am going to get some crossed looks or comments from this, but I am over bartenders' slapping basil. I understand it's to release the oil but why spank the basil? What has it done other than patiently wait for us to come and enjoy it?

It reminds me of when foams came on to the scene and everyone out there was overdoing it. Don't get me wrong, I love the craft cocktail movement, but it's the one move that I just can't take. It keeps me awake at night.

Do you have a wish or request for the San Diego food scene or local diners?
I chose the hospitality business because I find it a noble craft. I love having people get what they want, its built in to my DNA and makes me proud. If I had a gripe it would be trying to make someone happy who will NEVER be happy. It's a human flaw in some people. they just can't be positive and love life! They communicate through negative reactions.

So I guess if I have one issue, it's the Yelp reviewer who looks you in the eyes and says everything is great and then goes and bags you on a review. I enjoy Yelp and think it's a good tool but dang, just vent to the manager's face and not to potential customers!

Restaurateurs do not live in a perfect world and everything does not go right all the time. Let them know if it's not the way you like it, but don't ball it up and throw it at them when they are unable to fix it. We chefs and GM's love to fix things, it's part of what we do. I'm not going to throw a pan at you for asking to have your fish cooked more.

What makes cooking in here different than other cities you've worked in?
The chef community is what makes San Diego such a great food town. We have something very special that other cities I've lived in do not have and I really try and encourage it as much as possible. We do the Shuck n' Swallow and Sausage Fest events just so that I can host and have these guys over to hang out.

I don't think the really good chefs in town have an attitude about themselves. Everyone is very humble, that really makes it easy to get along. Take a look at Jeff Jackson, I could walk into his kitchen anytime to say hello and he would shoot the shit for a while. And he is a really big freakin' deal! Nobody in town has done what he has done and he is a totally egoless.

40 New Restaurants and Bars That Have Opened in San Diego