Welcome to Shit People Steal, a new feature in which Eater San Diego asks bar owners and restaurateurs what items in their restaurant have been (or are frequently) stolen. 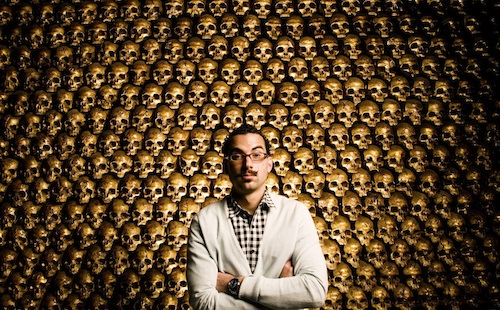 With four restaurant and bar concepts under his belt, plus more on the way, Consortium Holdings' Arsalun Tafazoli has seen people steal just about everything; he shared with Eater that it's resulted in his "complete lack of faith in humanity."

After the jump, Tafazoli sounds off on all that's been taken and how the thefts have changed how the group accessorizes each new project they open.

Are you a bar owner or restauranteur with your own Shit People Steal story to share? Send them, no matter how ridiculous, to sandiego@eater.com.

"At Neighborhood, one of the biggest issues were these custom made red LED balls that were used as an alternative to table candles; after spending thousands on replacing them after they were stolen we finally gave up, and switched to standard candles. I hear stories all the time about people going to someone's house and seeing one of our red balls on a coffee table.

We had a chair made of the collaboration skate decks we made with Stone Brewing Co. stolen during service. Someone stole the "People Hate us on Yelp" sticker we made and stuck on our front door. Our custom corn dog plates are stolen all the time, how someone steals fucking plateware is beyond me. We also used to have some awesome salt and pepper shakers that were containers labeled HEROINE and COCAINE...the list goes on.

After my experiences at 'Hood we are much less ambitious with cool accessories at Craft & Commerce. But shit still gets stolen, mostly menus; Terryl Gavre from BANKERS HILL BAR + Restaurant stole our ashtray out front. We've caught someone trying to steal an entire punch bowl set, which is no joke since it's a massive bowl and a set of six tea cups.

Books get stolen all the time, which I wouldn't mind if I thought someone was actually reading them. It's amazing what some hipster can fit into a pair of skinny jeans and a thrift store flannel. Our restroom sound system was stolen once as well."

Anthony Schmidt, Noble Experiment bartender and the bar's former general manager, also chimed in, "We once caught a guy trying to steal one of our gold skulls from the skull wall. He looked like he had an abnormally large hand covered by a long sleeve jacket. Dum Dum."
· Neighborhood [Facebook]
· All Shit People Steal on Eater San Diego [~ESD~]