Welcome to One Year In, a feature in which Eater sits down for a chat with chefs and owners of restaurants celebrating their one year anniversary. 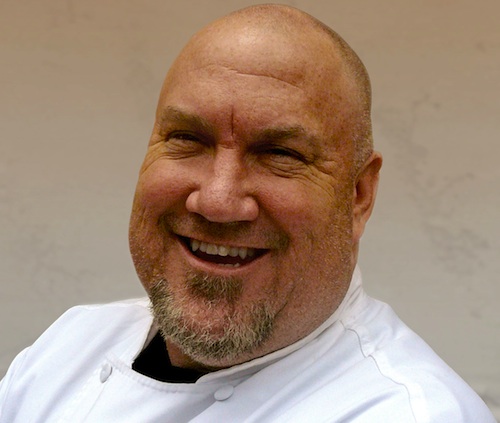 Culinary school took him to New England, but native San Diegan Hanis Cavin has lived and cooked here for the over two decades. In those years, Chef Cavin worked at Pacifica Del Mar, the now-closed Mixx and Dakota Grill, and North County's Pacific Coast Grill. His longest, and most recent, collaboration was with the Urban Kitchen Group, heading up their kitchen at the Kensington Grill. In December 2011, the chef and his partner and now wife, Sara Stroud, opened Carnitas Snack Shack in North Park. Fresh from his recent wedding in Mexico, Cavin talked with Eater San Diego about his plans for expansion and reflected on his first year as a restaurant owner.

At one point before Carnitas Snack Shack existed, you were going to open a restaurant in the Lafayette Hotel? What happened with that project?
The direction that the hotel owners wanted to go in wasn't what we agreed to when we started. We didn't want TV's in the bar, we wanted to do a certain kind of service and in the end, they kind of flipped a 180. But it put the taste of owning our own place in our mouths.

When did the Carnitas Snack Shack concept come about?
Once we saw Vo's Deli (on University) up for lease, that's when the concept got born.

Did you think about holding out for another possible space that would have fit your original, more fine dining restaurant plan?
No, it just sort of felt right — it's three blocks from our house and we're fans of North Park. A big part of it was that we could do it on our own financially.

What was your process behind developing the menu and the concept, did you bounce around a lot of ideas?
We did bounce around a lot of ideas, but no one had done a pork-centric restaurant; we thought, wow, there's steak and fish, but no pork. We didn't want to have service or servers — we kind of used Mama's Lebanese as an example because that works, and it's awesome. We've changed things a little...we deliver the food now, there's a little more service..but that's how we started.

I know you love pork (Cavin has a whole pig tattooed on his forearm), but do you ever feel constrained by the name?
Because we change two items on the menu every single day, I can do seafood, lamb — I kind of rotate things in. The funny thing is, I think we've done some nice seafood dishes but we'll sell a third of that compared to everything else.

How big of an adjustment was it for you to go from working for a big restaurant group to being on your own?
The biggest adjustment was that I started working more hours, which was unbelievable that I could, but we're open more hours than any place I've ever worked. I brought a lot of my staff with me though so we know what needs to get done and when.

What's the deal with being closed on Tuesdays?
We came up with it because Sunday and Monday are when our chef and GM friends have days off, and we wanted them to be able to come to our place so we could see them.

That's great, because a lot of chefs do come in and eat. Many of them have told Eater that they admire you for going out on your own, and focusing on something small, but doing it right. Do you think we'll see more chefs doing the same?
I do, Daniel Boulud and Hubert Keller have their flagship restaurants but they also have burger joints and smaller places. We can run them with the quality of product that we're all used to, but at a lower cost and attract a wider group of people. We've got people all dressed up coming from Rancho Santa Fe and dudes coming from the beach; how many restaurants can cater to both of them?

Do you think that might be an increasing trend in San Diego?
I don't know, I'd like to think that we helped start something. But it takes commitment, even though we're just a little shack, it's still a 24-hour-a-day place because we do make everything in house. I think that's part of what has helped us be as busy as we are.

Everyone knows you're doing serious food — having it come across in a really accessible way is a big part of the success.
I think that's going to be the challenge for whoever does it. Before we opened, we ate at a lot of mom and pop places, diners and delis and everybody was either shopping at Sysco or US Foods..and you know, it's a decent ham sandwich but they didn't buy the ham raw, brine it and cure it and roast it themselves.