Share All sharing options for: Matt Richman of Table 926

Welcome to One Year In, a feature in which Eater sits down for a chat with chefs and owners of restaurants celebrating their one year anniversary. 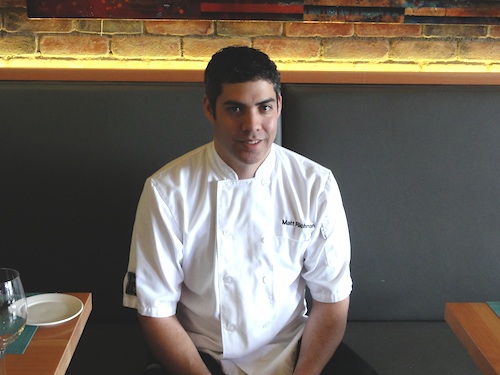 San Diego native Matt Richman graduated from the California Culinary Academy in San Francisco and worked at the city's Fifth Floor and Kokkari Estiatorio restaurants before returning to San Diego, where he spent four years at Pacific Del Mar before a year-long stint in a couple of Miami kitchens. Upon moving back to San Diego, he cooked at the Wine Vault & Bistro, was hired by Bradley Ogden to run Little Italy's Ilume Bistro and briefly served as sous chef under Chef Amy DiBiase at Old Town's Cosmopolitan. In 2009, he began to put together a plan and funds for his own restaurant — and last December opened Table 926 on Turquoise Street in Pacific Beach. The restaurant recently celebrated its first anniversary and Chef Richman sat down with Eater San Diego to reflect on the last year.

Why was the time right to open your own restaurant?
I think I was frustrated with working with particular restaurant owners that I didn't think really understood San Diego. Growing up here, I'm better able to know how this city works, and the clientele. I think I was upset by so many owners not understanding San Diego but trying to hire people from other cities to bring their style here, which we've kind of slowly figured out doesn't really work and it's kind of blown up in people's faces. My whole goal in culinary school was not to be on Top Chef; I wanted to bring consistently solid, honest food to San Diego, with very straightforward flavors and use the highest quality of ingredients — just become a neighborhood bistro, which is what this is.

Why did you choose to open in Pacific Beach?
I think it's a untapped market. I think north PB is clearly different from south PB and the Grand/Garnet, Mission Beach area.

I also think there's enough clientele on Mount Soledad and in downtown La Jolla who can't go out on Prospect Street every few days, so we think we're an alternative to that. Plus, this particular location has a history, with restaurants like Gustaf Anders being here (in the early 1980's) and Chateau Orleans.

The Fishery and the French Gourmet have been here for a long time; Oscar's Mexican Seafood down the street is doing a great job.

To be honest, I was looking in the North Park, South Park, Banker's Hill and Hillcrest areas but the prices of rent just didn't really match what our concept was.

What is the dining culture like in this area?
I think there's a level of sophistication — I think that people in La Jolla that have the palates to go to great restaurants like Nine-Ten, George's California Modern, Herringbone and Whisknladle, but their prices tend to be a little big higher.

I think we deliver the same quality of food — we all shop at the same places and use the same vendors. We have more non-nonsense kinds of dishes, we're a little more rustic; I think there's a niche for that. And there's a younger demographic in Pacific Beach that utlizes us for date nights and that kind of stuff, they don't have to drink beer and eat chicken wings.

What's the philosophy behind the food and the restaurant in general?
What I've learned over the years about San Diego, as compared to San Francisco, where I spent the most time, and what I assume happens in Los Angeles and other food towns, is that I think San Diego palates are getting better but need some encouragement to be more adventurous. We try to make some things that aren't completely mainstream more familiar, like pork cheeks. I think it's important to educate and introduce people to new ingredients.

How big of an adjustment was it, personally and professionally to take on running a restaurant?
I think over the past few years with some projects, I got thrust into a role of management in terms of the money side of things. That, on top of learning the construction side and those sorts of aspects really made it easier that I thought it would be. But it's still difficult; my partner is my dad but he's a silent partner. There are some days when I wish I could just cook and be a chef and not have to worry about stuff, but I'm learning.

What was your biggest challenge of the last year?
I think trying to figure out the best way to market and publicize the restaurant in this changing world of social media — going away from print media. Dealing with taxes is always tough too. But we're doing well, we're fiscally conservative — we cost everything out properly to make sure it's not only a value for the guest but also to make sure we keep our heads above water.

How are you able to juggle cooking and all the business aspects?
I hired an exceptional sous chef from San Diego, Molly Johnson, who worked with me at Ilume Bistro and then worked at El Bizcocho for three years and really honed her craft on the high-end, fine-dining side of things.

Since you're a native, how have you seen San Diego restaurant community change?
When I was growing up, my parents were big foodies so we would go to the Belgian Lion, Piret's and those sorts of places. That's when I first got the feeling that we weren't just a fish taco and carne asada town. And then you started to see more interesting vegetables, different cuts of meat, more seafood. There are definite leaders, like Trey Foshee, Jeff Jackson, William Bradley, Carl Schroeder — he's a local guy too. I don't think things are as competitive as it was before, I think now because of the economy and changing attitudes there's a sense that if we can all do things collectively then it's better for everyone.

What defines food in San Diego and makes it unique?
Obviously the produce, the availability of growing year-round is what really separates the whole state of California. I think the local sustainable seafood movement is really important. San Diego is casual in general, so you have to adjust your menu to fit that, where you're not putting 25 elements on a plate or using tweezers all the time. San Diegans need to have places where they feel comfortable. Our responsibility is to be able to feed them new items and capitalize on that.

What aspects of local food culture could use improvement or more attention?
I really wish diners would stop using Yelp to define where they want to go. There's so many little hidden gems of restaurants and so many talented chefs who just aren't getting the exposure that they deserve because people aren't adventurous as they could be.

What's in store for Table 926?
We're trying to do more community-based programs to get more involved with the North PB and Birdrock area. And we definitely want to add outdoor seating and maybe explore doing brunch. Starting in January, we'll offer about 70% of our wine list at $10 a glass $40 a bottle to energize wine sales.

Has the year flown by?
Yes, it's been a fast year. Our anniversary definitely crept up on us. It's a good thing — we're busy and energized, I still roll out of bed excited to come to work every day.

Do you have a nugget or two of wisdom for other local chefs?
Just keep at it. It's tough, especially in Southern California, being paid very little as a line cook or sous chef. You just have to power through it. On the ownership side, the most important thing is to always have more money than you think you'll need. That's a big one, because it goes fast.