Introducing a new tradition for Eater San Diego, a closeout of the year in food with a survey of friends, food media, industry experts and bloggers. This year, we asked the group questions that ranged from their thoughts on Meal of the Year to 2013 Dining Predictions and we'll be posting their unedited responses throughout the week. We've already covered the Top Restaurant Standbys, now here are the Top Newcomers. Readers, feel free to play along and add your own answers to this year-end food survey in the comments. 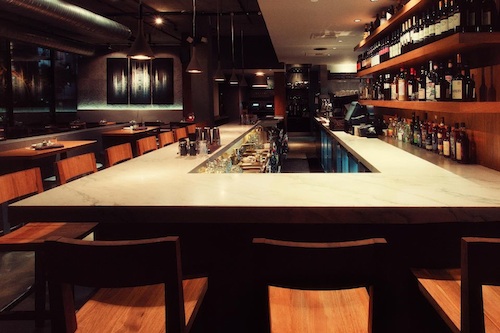 Q: What are the top restaurant newcomers of 2012?

Amy Granite, The Grubby Bitch columnist, San Diego CityBeat: Monello in Little Italy. I could sip that house made sweet vermouth all day, and chef Fabri's homemade pasta, particularly the carbonara, is made with love that you can taste. Another one is Plumeria in University Heights, a vegetarian Thai joint with dishes so flavorful that I don't even miss the meat.

Jane Bills, Let There Be Bite: True Food Kitchen, Elevation Burger — I hope this emphasis on responsibly-sourced ingredients continues, and that the public starts to demand more of it.

Roddy Gibbs, Rodzilla Reviews: Akinori Sushi — there are many great sushi spots in SD, but Chef Aki sets himself apart by providing a more modern type kaiseki menu with some inventive ingredient pairings techniques.?? Carnitas' Snack Shack— Instant hit. I don't think I've heard one negative report. ??PrepKitchen Little Italy — Maybe the first opening of the year 2012 and definitely one of the biggest. They were instant hits building on their popularity from the existing Whisk/Prep establishments, and became another standby for a great time out.

Amy Finley, contributor, Riviera Magazine: For a wee little restaurant, Carnitas' Snack Shack has definitely made a huge impact on the University corridor. The porcine delicacies are notable, but I think even more important is the precedent it sets for chefs with grander ambitions than bankrolls. Hanis Cavin and Sara Stroud transformed a taco shop, creating a walk-up space that feels urban and modern, and — most importantly — doable. Opening a restaurant is ungodly expensive. Carnitas offers chef/owners a whole other script to follow for how to get it done. Then there's Brooklyn Girl, which followed the standard formula: throw money at it! The restaurant made a big splash in Mission Hills, a sleepy neighborhood that should have a much more passionate food scene (aka, hit up that Thursday night Farmer's Market). Though there was a chef change early on, the following has remained, thanks in part to the kind of menu that almost requires convivial, communal, loud, spirited dining (share the porchetta), which I think is the way we want to eat now. Food is social. Food should be fun. And accompanied by great cocktails, natch. Brooklyn Girl's working that formula well. l'd also have said that Luke Johnson cooking at Sky Room at La Valencia was a great development if that glorious, beautiful food chapter hadn't opened and closed so quickly!

Kirk K., mmm-yoso: I thought 2012 to be pretty slow with regards to the places I frequent most often; those ethnic, family owned restaurants that provide soulful, comfort food. The two that come to mind are: Antojitos Colombianos— Some of the best lengua I've ever had. Nyat Vy— Finally, a shop that makes a decent Banh Cuon.