Share All sharing options for: Debi Saltzberg of CUCINA urbana

Welcome to The Gatekeepers, a monthly feature in which Eater chats with the men and women who command the front of house at some of your favorite restaurants. 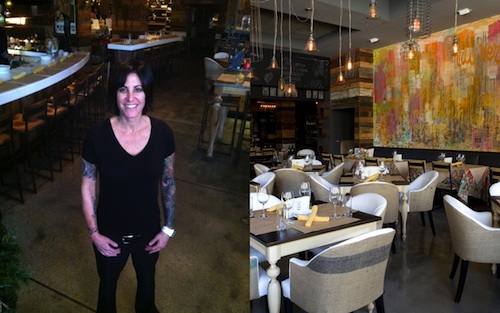 Debi Saltzberg holds a degree in hotel and restaurant management from UMass Amherst and has spent the last ten years working in the San Diego restaurant industry. For four years, she helped to oversee North Park's Urban Solace and their newer Solace & The Moonlight Lounge; in January of 2011, she moved to CUCINA urbana in Banker's Hill to join the team as their general manager. The restaurant opened in 2009 and is still one of the toughest spots in town to book a reservation. Saltzberg talked to Eater about her life as CUCINA urbana's Gatekeeper and gave tips on how to score a table.

Has CUCINA urbana been consistently busy since you started?
Yes, the restaurant is busy — it's always busy. We've done more volume this year than we did last year.

How many seats are in the house? What's the best table?
There are about 108 seats, not including the bar and community tables (walk-in areas) which seat 55. For the best table, it really depends on the individual — some people like to watch the action from up in the atrium and other people like to be in the thick of it on the main floor.

Can you make a reservation for one of the atrium tables?
You have to call in to the restaurant, we don't put those tables up online on OpenTable because the seats are bar level, so if you're elderly, physically challenged or pregnant you wouldn't want to sit on them.

It's a busy Saturday night, what's the wait for a table?
We're usually filled with reservations. That doesn't mean that we won't try to move some things around if we can, if someone waits, but on a busy Saturday, the only guarantee is to walk in for one of the 55 communal seats. It's easier if you're a group of two and more difficult if you're a group of five or six, but not impossible.

Is there anything I can say or do to make my wait shorter?
Right when we open, there's usually a line at 5 p.m. If you're persistent — if you know in your mind that you're going to get in, you're gonna. We'll make it happen, we'll help you; you can enjoy a cocktail while you're waiting. You just have to be a little bit patient.

If someone wanted a table at a specific date and time, what do you recommend?
I think the most requested reservations are a two-top at 7 p.m or a group of three or four at 7:30 p.m. So a little bit earlier or later is better; you can come in early for a drink and we'll seat you as soon as a table is ready.

What's the busiest night?
In the summertime, besides Friday and Saturday, it was Tuesday nights. Our busiest night is usually Saturday, but the biggest volume that we do is on Friday because we don't close between lunch and dinner — the bar stays open.

And the least busy?
It's all relative, but because of football and the fact that it's getting darker earlier, Monday nights have been a little lighter. Tuesdays are a bit quieter.

What's the most outrageous request from a customer you've had to accommodate? Or crazy thing that's happened in the restaurant?
Someone brought in a child who was deathly allergic to a long list of items. The parents didn't ask beforehand, but when they were already seated, they asked us to cook their daughter's food in these specific pots and pans that they had brought with them. It was a busy Saturday night during December Nights weekend; if they'd asked before I would have probably said no, but in the heat of the moment, we went ahead and did it.

And a few months ago, a couple got married at the bar. All of a sudden, a justice of the peace was there with about ten people, and they were married.

Tell us about your favorite customers?
We try to treat all of our guests like VIP's, but we do a free shuttle to the Old Globe so we have a lot a regulars who come in during the season. A lot of them have been coming for so long; they're older and really sweet, they always order the same things.

Then there's Ruth and Vinny who come in every Monday at 6:30 p.m. in the winter or 6 p.m. in the summer. We have a standing reservation for them and we get their food and drinks ready just how they like it.

What's your favorite dish there?
I love the pizzas. I'm the pizza tester, I eat some pizza every day. I go through different phases where I eat the same thing — I just got off the bucatini all'amatriciana and now I'm onto the roasted Jidori chicken with polenta and vegetables.

And the best thing to drink?
I'm a beer drinker so I'll have one when I'm done with my shift, but I love Cucumber Blossom or a whiskey drink called the Modern Man.

What's the one Gatekeeper tool you need to do your job?
My shifts are long, 12 to 15 hours. I go through coffee and, I know it's awful, but sugar-free Red Bull. And I work out a lot.

Where do you eat when you're not here?
I love Urban Solace, upstairs on the terrace at George's, BO-beau in Ocean Beach. I like Underbelly in Little Italy and sushi — I go to Harney Sushi in Old Town or La Jolla's Sushi on the Rock.

Is there another restaurant that you think does a good job at running a smooth front of house?
I always look at that when I go into a restaurant. When I look at Island Prime and C-Level, I don't necessarily love their food but I love their ambiance and service. I love the stealthness of their servers — you don't see them, but all of a sudden you're re-plated, or re-silvered and you didn't even notice. I think that's sexy.
· CUCINA urbana [Official Site]
· All Eater San Diego Interviews [~ESD~]