Share All sharing options for: The Eater Pappy Locator 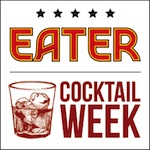 The Old Rip Van Winkle Distillery's bourbon — often called Pappy Van Winkle or Pappy — is a cultural phenomenon. Bourbon connoisseurs have long held it up as one of the world's best, while limited production has ensured that it is also one of the world's most sought after bourbons. And now just so happens to be Pappy season, the time of year when Old Rip Van Winkle Distillery sends out shipments of its cult-like bourbon across the country. Here's the Eater Pappy Locator, with two San Diego spots on the list!